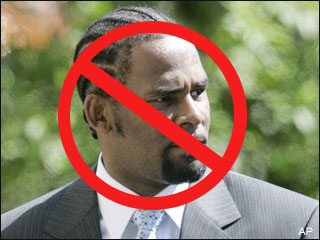 For the past 6 years I’ve had to deal with a lot of escalation of beef from the dj booth when I squash R. Kelly requests.

And the saddest part is that black women usually get the most indignant when I respond with “I don’t play the music of child molesters”.

A couple of times I’ve relented. And the joy in the room once I dropped the tune just made me feel terrible. Like a hypocrite.

I haven’t yet heard anyone whooping it up to “Not Guilty” (like ‘Tay predicted) but Jesus be my strength against a grand mal kirk-out if it does come to pass.

It’s much bigger than records at parties though.

We have to do better.

Statement of Black Men Against the Exploitation of Black Women

Six years have gone by since we first heard the allegations that R. Kelly had filmed himself having sex with an underage girl. During that time we have seen the videotape being hawked on street corners in Black communities, as if the dehumanization of one of our own was not at stake. We have seen entertainers rally around him and watched his career reach new heights despite the grave possibility that he had molested and urinated on a 13-year old girl. We saw African Americans purchase millions of his records despite the long history of such charges swirling around the singer. Worst of all, we have witnessed the sad vision of Black people cheering his acquittal with a fervor usually reserved for community heroes and shaken our heads at the stunning lack of outrage over the verdict in the broader Black community.

Over these years, justice has been delayed and it has been denied. Perhaps a jury can accept R. Kelly’s absurd defense and find “reasonable doubt” despite the fact that the film was shot in his home and featured a man who was identical to him. Perhaps they doubted that the young woman in the courtroom was, in fact, the same person featured in the ten year old video. But there is no doubt about this: some young Black woman was filmed being degraded and exploited by a much older Black man, some daughter of our community was left unprotected, and somewhere another Black woman is being molested, abused or raped and our callous handling of this case will make it that much more difficult for her to come forward and be believed. And each of us is responsible for it.

We have proudly seen the community take to the streets in defense of Black men who have been the victims of police violence or racist attacks, but that righteous outrage only highlights the silence surrounding this verdict.

We believe that our judgment has been clouded by celebrity-worship; we believe that we are a community in crisis and that our addiction to sexism has reached such an extreme that many of us cannot even recognize child molestation when we see it.

We recognize the absolute necessity for Black men to speak in a single, unified voice and state something that should be absolutely obvious: that the women of our community are full human beings, that we cannot and will not tolerate the poisonous hatred of women that has already damaged our families, relationships and culture.

We believe that our daughters are precious and they deserve our protection. We believe that Black men must take responsibility for our contributions to this terrible state of affairs and make an effort to change our lives and our communities.

This is about more than R. Kelly’s claims to innocence. *It is about our survival as a community*. Until we believe that our daughters, sisters, mothers, wives and friends are worthy of justice, until we believe that rape, domestic violence and the casual sexism that permeates our culture are absolutely unacceptable, until we recognize that the first priority of any community is the protection of its young, we will remain in this tragic dead-end.

We ask that you:

o Sign your name if you are a Black male who supports this statement:

o Make a personal pledge to never support R. Kelly again in any form or fashion, unless he publicly apologizes for his behavior and gets help for his long-standing sexual conduct, in his private life and in his music

o Make a commitment in your own life to never to hit, beat, molest, rape, or exploit Black females in any way and, if you have, to take ownership for your behavior, seek emotional and spiritual help, and, over time, become a voice against all forms of Black female exploitation

o Challenge other Black males, no matter their age, class or educational background, or status in life, if they engage in behavior and language that is exploitative and or disrespectful to Black females in any way. If you say nothing, you become just as guilty.

o Learn to listen to the voices, concerns, needs, criticisms, and challenges of Black females, because they are our equals, and because in listening we will learn a new and different kind of Black manhood

We support the work of scholars, activists and organizations that are helping to redefine Black manhood in healthy ways. Additional resources are listed below.

Films:
I Am A Man: Black Masculinity in America, by Byron Hurt
Hip Hop: Beyond Beats and Rhymes, by Byron Hurt
NO! The Rape Documentary, by Aishah Simmons