Another entry in an ongoing series about the realities, challenges and tactics of spinning records in public for pay…

Catch up on previous episodes!

I borrowed a few of these from StuffDJsHate‘s retweets. Follow him.

I don't give a shit if you're a producer. Your shirt is 4 sizes too big & you're wearin an albino kangatang coat. I'm not taking requests.

But he’s a producer…

Gas face to everybody crop-dusting in the club.

We have to stop pretending this isn’t happening.

Some girl requested a song from Pokemon last night. She thought my serato was spotify & that I was lying when I said I couldn't.

Eating a quesadilla in the DJ booth like its nothing. >_<

AT THE SAME DAMN TIME.

Just witnessed a drunk (lifeless) bride, gettin pushed from the lobby to her room, by her wedding party, on a luggage cart! #ThroughSickness

Not actually from the booth, but could have been.

NO YOU CAN NOT HAVE A PHOTO ALONE BEHIND MY DJ BOOTH.

I should also market myself as a relationship expert. 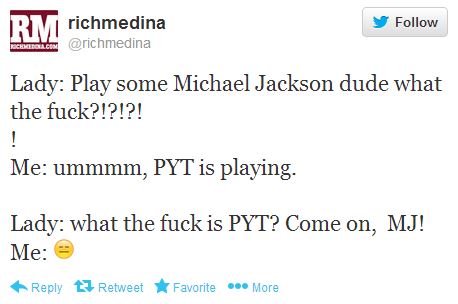 Some DJ you are.

11 Replies to “Tweets from the booth, episode 7”