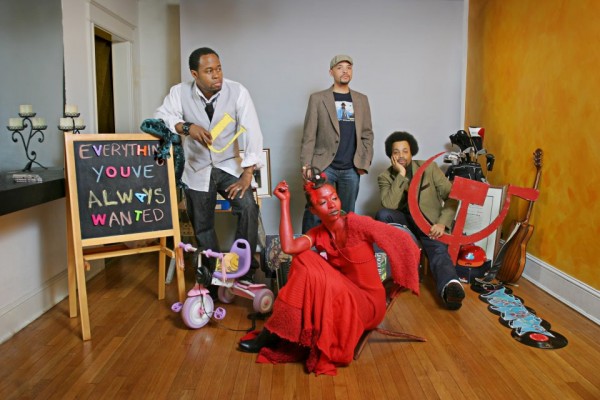 Despite the fact that this record was held in limbo indefinitely, folks still check for us old guys who do the rappity-rap stuff. In gratitude for that, this is the album that you always knew we could make. We actually made it! But we never put it out. Eventually we put out a mixtape instead, so you can check for that too. A lot has changed between when we first started working on it and today, so there’s really no reason to sit on it anymore. Go free, formerly imprisoned album! Emphasis on ‘free’, because we’re not charging for it.

So yes, the homies are rapping like you remember us rapping. You’ll also recognize some of our good friends including Roddy Rod, Tamara Wellons, Wayna, Raheem Devaughn, Kokayi, Oddisee, Darien, Bilal Salaam, Storm the Unpredictable, Priest da Nomad and Asheru.

*For those who are like, “what the kcuf is a POEM-CEE?”

We’ve been described as Run-De la Soul, although we did have a band for a long time. We’ve been on Def Poetry Jam. Rocked 9:30 Club a few times. We were born in State Of The Union. If you were there, then you know. We made a few records, including a weird one.

naturalaw-DP can be found rapping less and playing guitar a lot more. For Thaylobleu, Kokayi, Lady Pcoq and The Plumes and Melo-D and the Rados. Black Picasso still slams. And y’all know what I be doing.

There you go, all caught up now.

2 Replies to “That lost POEM-CEES album”