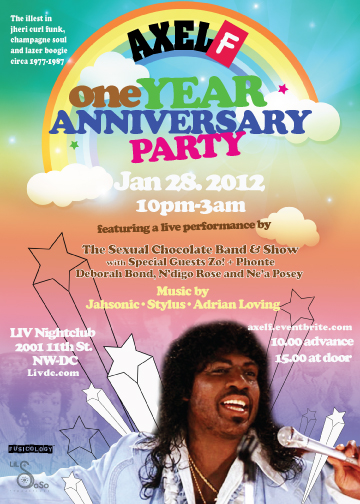 In 2011, a concept was born to take a wondrous period of dance music out of the dark and into the light.

This magical time from 1977 – 1987 bore the imprint of the disco age and the promise of the hip-hop era to come. It was the music we partied to when Reaganomics was going hard. A time when your video was not touching hearts and minds without synchronized body rolls and laser light effects.

It’s all the music that no one else ever plays at ’80s parties.

Throughout 2011 we celebrated this music, and you showered it with the love it deserves. We called it Axel F, after Eddie Murphy’s character in Beverly Hills Cop.

This month we celebrate one year of The Illest In Jheri Curl Funk, Champagne Soul & Lazer Boogie.

with your resident DJs: