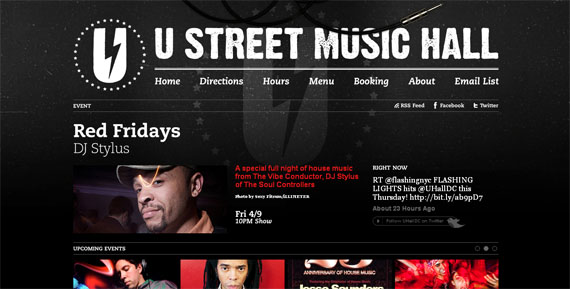 What is U Street Music Hall?

It has the most ridiculous sound system in the city. The kind where you’re submerged in the bass without feeling assaulted by it. It is the anti-club (no dress codes, table service, velvet ropes, not even photography). It’s all about DJs and dancers. It has a cork cushioned hardwood dancefloor. It’s owned and managed by DJs and while they do bring in the big names, they give locals prime bookings.

I’m pretty amped about this.

What are Red Fridays?

In 2005, Red closed after nine years of operation. This place was little more than a small basement with giant speakers crammed into it. Awesome things happened there. It was the gravitational center of the city for people who loved their house music deep, banging and transcendent. Sam “The Man” Burns tended his flock there, as well as a fraternity of cats I learned from like Doug “95 North” Smith and Oji. The folks behind U-Hall are programming each night of the week around a theme, and Fridays are the deep house night.

So if want to lose yourself in soulful house, latin house, deep house dubs, disco classics, boogie, broken beat and various hues of uncompromising blacktronica, please join me this Friday. It will mean a lot to play to folks who will really go THERE with me in the only space in the city designed for it.