Join us for Silhouette Brown’s first DC performance ever! Hosted by Ne’a Posey the night will feature an opening performance by Selective Intelligence and sets from DJ Stylus.

Silhouette Brown resides in the US and emerges from the ranks of London’s musical hub. Produced by the trilogy that is Dego (2000black/4hero), Kaidi Tatham (2000black/Agent K/Bugz In The Attic) and co-writing/production talents of Bembe Segue, Silhouette Brown is currently joined by the unmistakable vocal sounds of Philadelphia’s Lady Alma.

The performance will take place on the main floor at Tabaq and will be transformed courtesy of staging provided by Gaia and Asahra. Tickets are available at www.lilsoso.com, with special discounts for multiple ticket purchase. 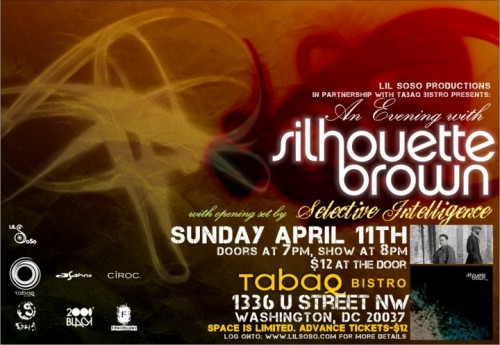