This year the family reunion vibe trumped the hustle, and I’ve come to appreciate that a lot more. I don’t know how much of it is the economy, a shift in the industry or a waning interest in WMC but attendance was noticeably lower. Last year I noted a recession effect and this year my mans John Crooms accurately quipped how South Beach was trying to get us all to pay for it. The gouging was ill this year. 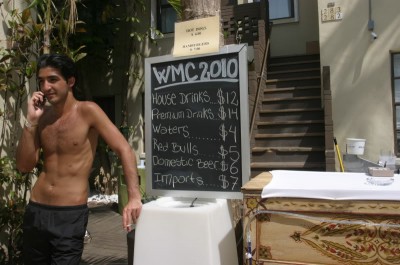 Even at a low point in the cycle, I was able to get great performances from the names I trust to always bring it, and also those moments of discovery when you get to experience artists and DJs you’ve heard about but never seen live before.

I didn’t make it to any Louis Vega associated parties or anything that had to do with South Africans. This was a huge FAIL on my part. Black Coffee and a bunch of his South African compatriots are making a big splash in the deep house world and they had some hot events at WMC this year. I’m really happy to see them blowing up. “Superman” is a big record now and we’ve been banging “Even Though” over here for the longest.

I’m pleased that Jahsonic and I were able to get our dynamic duo on and grateful to the folks who let us grace their sets. Afrique Electrique was a fun way to get the week started with a nice intimate room of appreciative dancers. Shouts to Salah Ananse and the whole ATL massive. Playing in memory of James Brown at Godfather IV was a deep honor. And our set at The G++dness was us showing everyone how we get down back home in DC. Much thanks to Daz-I-Kue for both of those. 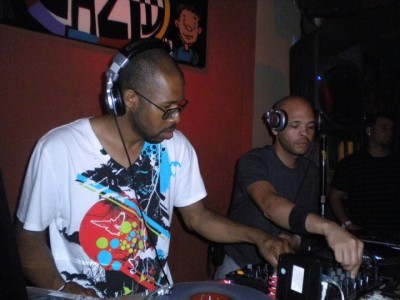 Despite not hitting as many events as I usually would, here are a few highlights.

The perfect end to the week had me dancing on a backyard patio for 8 hours, eating burgers, drinking cold Mexican brews and experiencing some inspired, ridiculous displays of mixing records. Experiences like that will always allow me to be a fan, especially when you see how the big dogs in the game are all fans too. I love it. Still haven’t been to the Do-Over in L.A. but I now know what’s up.

Maceo of De La Soul was on when we arrived and I was a teen fanboy again. At first I was surprised by how he was as equally versed in broken beat, UK Funky and electro as he was with hip-hop, soul and funk. Then I remembered that he’s been doing this for 20-some years and rocking parties all over the world and I felt dumb. Jeremy Sole followed Mase, more on that later. Vikter Duplaix broke down to jazz after Jeremy and built back up through neo-soul, raw hip-hop and reggae before bringing the tempo up. Masterful. Rich Medina followed him with an all 45 set that made me feel like I knew nothing after collecting records for 20 years. Cosmo Baker was up next and he was one of the dudes I was most looking forward to hearing for the first time. After a whole day of monstrous sets, Cosmo stepped up and spanked it. Boogie, deep funk, disco, breaks, all handled with a party-rocker’s expertise. All on original vinyl. And his dashiki was cleeeeean.

The party was going into overtime with Daz-I-Kue, Jeremy Ellis and John Arnold among others next on deck. I could barely walk at that point and was obsessed with getting some delicious Tap Tap.

I caught the tail-end of the TRIBE jam since we were rocking at Godfather at the same time. When I got there, Peven Everett was in full holy ghost mode in the last couple of tunes of his show, working himself into a pentacostal trance. Ian Friday got on and damn near had folks coming out of their clothes out on the sand and under the palm trees. But that’s how he always do.

I try to stay up on my research. I knew about Jeremy Sole‘s Afro-Funké party in L.A. I knew about his band Musaics. What I didn’t know was that he was going to stomp a funkhole into the Do-Over amid a band of heavy hitters dropping bombs of their own.

Is that cumbia? Plena? Is that an original edit? What break is that? Jeremy’s set sparked tons of mental notes and even more furious dancing. It was a well paced, seamless, ridiculously funky tour through classic and modern beats of the latin diaspora. I still won’t rest until I get every record in his set list. It’s that serious.

Runner-up: Ezel at The G++dness

Young master Ezel put on a clinic on the 2nd floor of Jazid at The G++dness. I think he caught Shango. His house set was very aggressive but well paced. He reminded me of Karizma in that way. It’s scary to think about how much iller he’s going to be in years to come on the decks and behind the boards.

Records you should be checking for:
At least the ones that I can mention… my trainspotting had me blowing up records on Twitter that aren’t out yet!

Aloe Blacc – “I Need a Dollar”
Ezel feat. Tamara Wellons – “In My Lifetime”
The Goodness EP